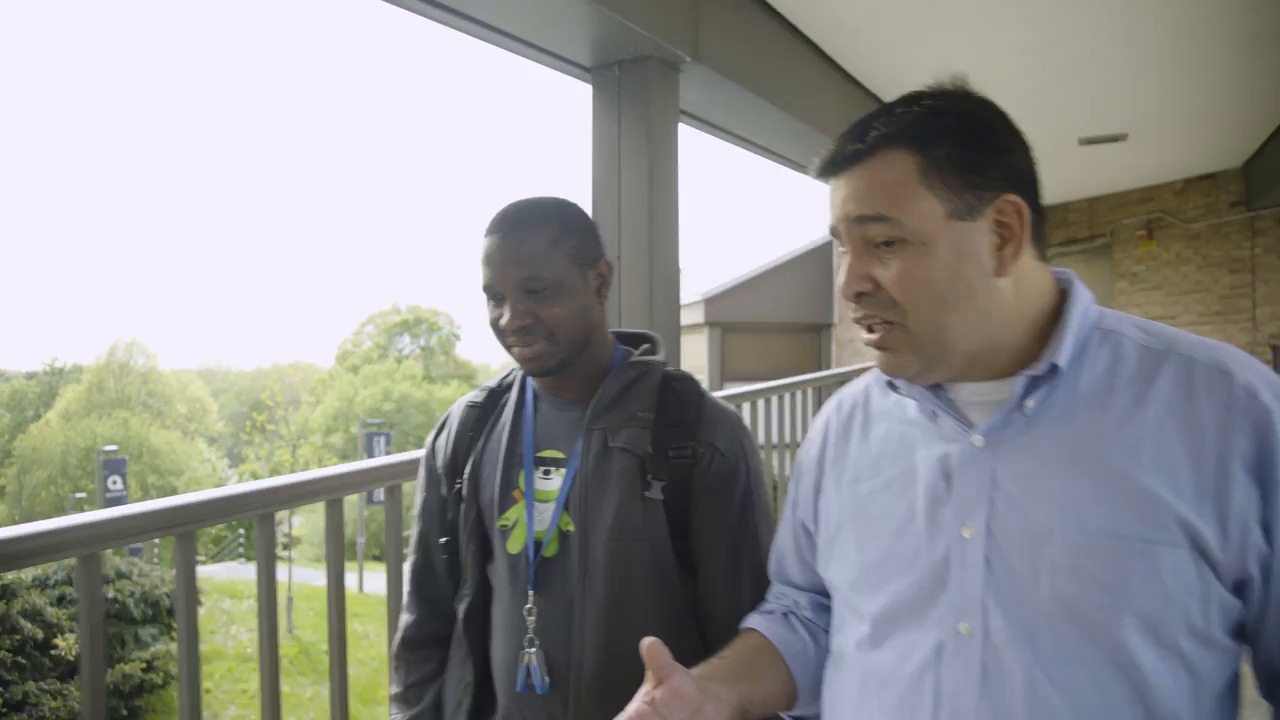 Hands-On Training in the Army Fuels a Passion for Engineering

When Enrique Haro was 17 years old, his family immigrated to America from Peru and settled in New York City. As soon as he was old enough to set out on his own, he joined the U.S. Army.

It was on a military deployment to Kuwait where he realized the real-life impact of electrical engineering.

When Enrique stepped off the plane in a place far different from New York.

“My unit deployed to Iraq for Operation Iraqi Freedom. We landed in Kuwait first to acclimatize before continuing to Iraq. All I could see was sand dunes,” he says.

“There was no technology or real infrastructure in sight. Just hot desert. I realized then that I wanted to be able to make electronics that can go anywhere in the world, where there is no electricity, and run on solar power and make a difference in people’s lives, by bringing technology to remote places.”

Enrique remembers the unbearable heat he experienced in those days. “It was almost 129 degrees and we had full gear. Some soldiers were passing out at the shooting range, others got blisters on their face just from contact form the hot metal of the rifle while aiming at the target. That heat was no joke.”

Back in the U.S., he got more than he expected from his engineering education.

When Enrique enrolled in an online electrical engineering class. To his surprise, a package was delivered to his door containing a Tektronix oscilloscope. “That was the first time I put my hands on a scope,” he recalls. “I was really surprised that I was being loaned what was essentially an electronics lab so I could take this course from an Army base in Texas. If you're serious about electronics or engineering, you need to have your own lab. And what a way to start one—with a brand-new Tektronix scope.”

After completing his military service, he enrolled in New York’s Queensborough Community College’s electronic engineering program. Upon graduating, he worked at QCC as an engineering technician, and was asked to provide input on ordering new equipment. “I knew this was a prime opportunity to improve the QCC lab, so students could have the hands-on experience I received in Texas” he says. “QCC needed a spectrum analyzer on every bench, since we only had one that professors had to demonstrate concepts on. I brought the MDO3000 to the staff’s attention and convinced them to invest in seven units.” (one per RF station and one for the instructor)

From student to advocate and instructor

Fast forward, Enrique’s mentor at QCC retired, paving the way for him to become an adjunct instructor and telecommunications course director at the school.

Today, Enrique teaches students in the same lab that he helped improve as a technician and where he sat as a student years before.

“I'm so proud of the lab because it gives us the opportunity to teach the physical aspects of radio frequency that cannot be taught with simulation.”

The students can actually troubleshoot their own written work on a real scope. And when they’re using the equipment they are so engaged—you can see it in their eyes.

"They light up when the data is being displayed in front of them.”

“So many people learn by doing things as opposed to reading about them in books. Enrique really recognizes the practical value of actually doing engineering work in the college classroom—pushing buttons, twiddling knobs, understanding the measurements and the value of being able to actually physically work on the bench and put things together and understand what's going on.”

“A lot of Ivy League schools don't even have the lab setups that are available at QCC,” adds Alan. The students here really have a leg up because of the access to the equipment. It’s something you just don’t find everywhere.”

Getting his students ready for the real world is exactly what motivating Enrique as an instructor.

“Giving students the confidence to do hands-on work, which they need once they go out in the industry, is the most important thing”

“When students are pre-exposed to the equipment they’ll use in the field, graduating students have a more direct experience when they arrive in the workplace. They are ready to interact with a problem instead of having to learn how to interface with equipment before they can even approach the task at hand.”

After using the MDO3000 for 4 years, Allan showed the new 3 Series MSO to the students at QCC. Watch what they had to say: