I recently took a look at which bus decode packages engineers are choosing for their scopes. I thought I would share what I learned in case it helps people predict which bus support they will need. In addition to a few thoughts on each of the most popular buses, you will find links to app notes on many of them.  For this post I looked at Tek scopes with bandwidths of 350 MHz to 2 GHz, which are the ones most often available to professional designers.

Years ago, scopes only offered support for a few protocols.  Today there are many more oscilloscope decode options.  For example, here’s a list for the new Tektronix 4 Series MSO:

This list continues to grow, so the best way to get the latest info is to check the oscilloscopes page on Tek.com to see what’s available.

Most of the Tek packages offer not only decoding, but also triggering and search capability.  The screen below shows a SPI bus being decoded, triggering on a data byte of 0xE9, and searching to determine all occurrences of data byte 0xE9 in the acquisition. 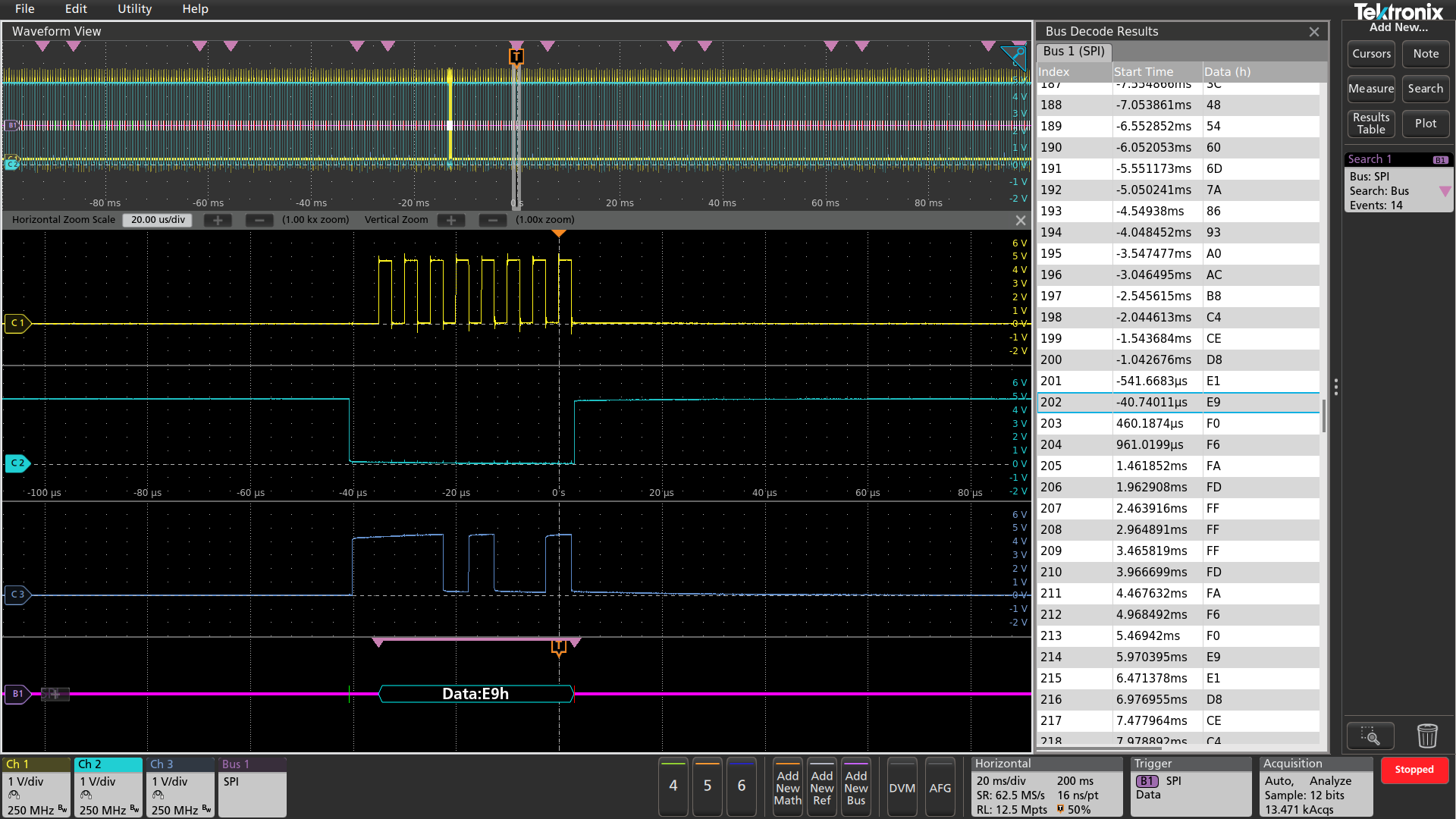 SPI bus being decoded and displayed as a bus waveform and results table on a 4 Series MSO.  The trigger is set to data byte 0xE9, and search notes all occurrences of data byte 0xE9 in the acquisition.

So, which packages do engineers commonly configure into their scopes?  Not surprisingly, the buses that rise to the top are ones used in inter-chip, peripheral, or network interfaces across many industries. The buses engineers choose for their scopes make perfect sense.  Each bus has different strengths and different sponsors, but all of them have well-designed (or highly-evolved) standards and proven track records.  Each one of them has been around for decades.  Here they are in reverse order of popularity:

This pervasive network standard has many variants that have evolved over the decades since the first Ethernet standard was introduced.  Decode options for Tek bench scopes cover 10BASE-T and 100BASE-TX.  These standards are used in embedded systems for networking applications and are sometimes used for point-to-point communications thanks to its versatility, widely-available hardware and software stacks, and a 100 m range.  Microcontrollers with built-in 10/100BASE-T controllers and Ethernet stacks are readily available. This application note Troubleshooting Ethernet Problems with Your Oscilloscope explains how to use Ethernet decoding for debugging.

The Universal Serial Bus (USB) is aptly-named.  It has replaced RS-232 in the computer industry and its applications continues to expand.  While most computing platforms are moving to USB 3.1 interfaces, embedded systems continue to use USB 2.0 for short-range (<5 m) cabled communications due to cost considerations and ease of implementation.  Many microcontrollers include support for Full Speed communication which supports data rates up to 12 Mb/s.  Some also support High Speed communication which supports data rates of up to 480 Mb/s.  You can download Troubleshooting USB 2.0 Problems with Your Oscilloscope to find out more about decoding, triggering and searching on USB 2.0 traffic. 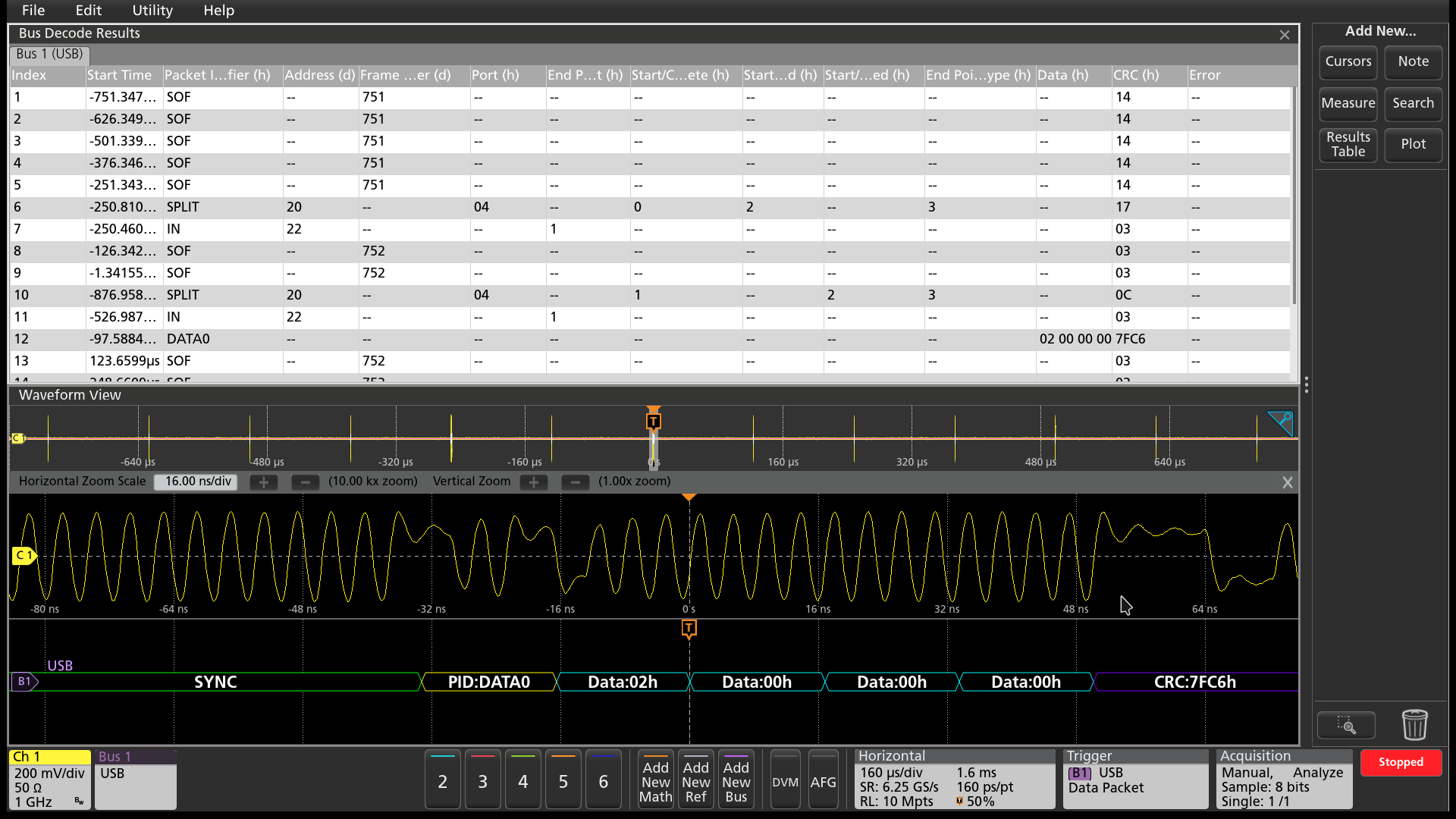 Although this network bus started in the automotive industry and is widely used in cars, it’s robust 2-wire design has found its way into other industries.  The CAN in Automation https://www.can-cia.org/ organization, for example, works to bring the standard outside the car into other network applications such as industrial and building automation. Our packages combine other buses that are used in concert with CAN, including LIN and the higher data-rate version, CAN FD.  Our application note Debugging CAN, LIN and FlexRay Automotive Buses with an Oscilloscope covers the capabilities and uses of CAN decoding packages on bench oscilloscopes. 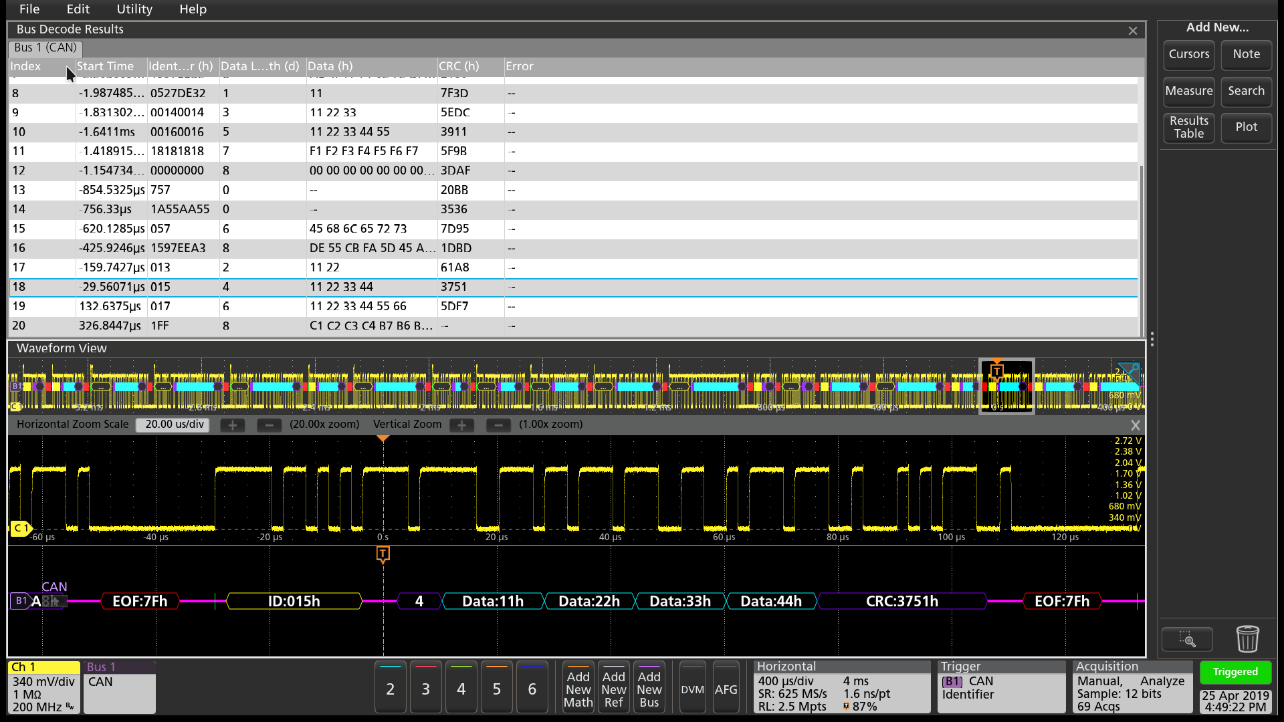 CAN bus decoding, triggering on a user-specified identifier, in this case 0x015.

Talk about staying power!  This system level bus was designed to connect data terminals to phone system modems and has been around since the 1960s.  Thanks to its simplicity, it is still common for today’s microcontrollers to include one or more UARTs.  Although it’s no longer widely used for computing equipment, it is often used in embedded systems to support low data-rate communications between modules.  The Tek packages support RS-422, RS-485, and UART variants. 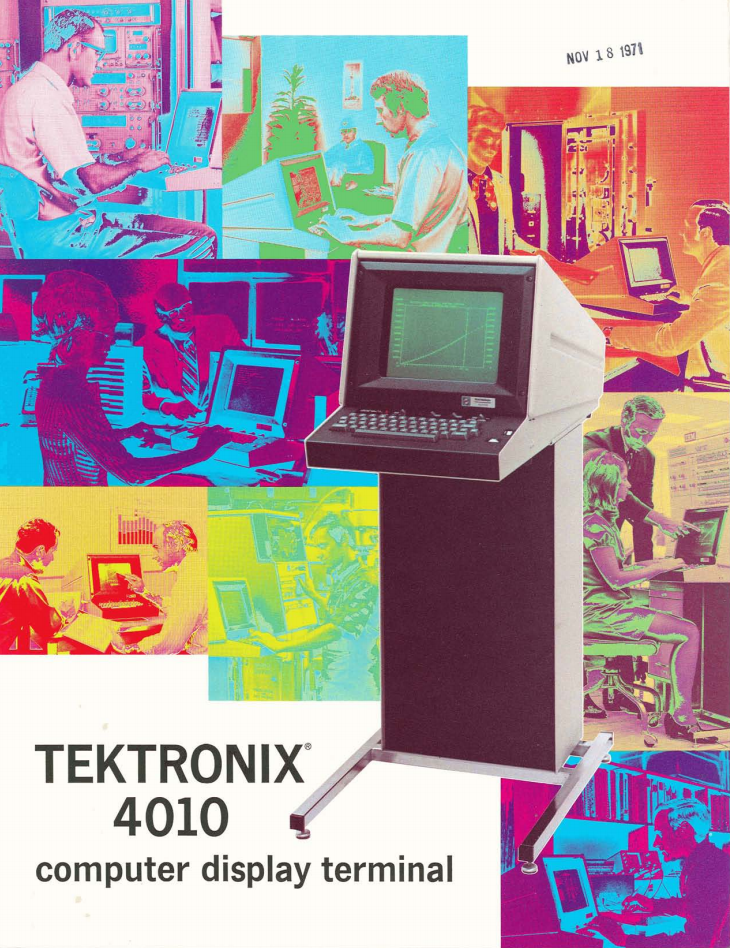 These ubiquitous inter-chip buses are everywhere in embedded systems.  It’s practically impossible to trace through a signal chain between a peripheral device and microcontroller without running into I2C or SPI.  Most microcontrollers and many peripheral chips include both interfaces.  It’s no surprise that these are the ones designers most often add to their scopes.  Tek combines these two buses into one option, so they share the number 1 and 2 spots.  They are also combined in How to Troubleshoot System Problems Using an Oscilloscope with I2C and SPI Decoding.